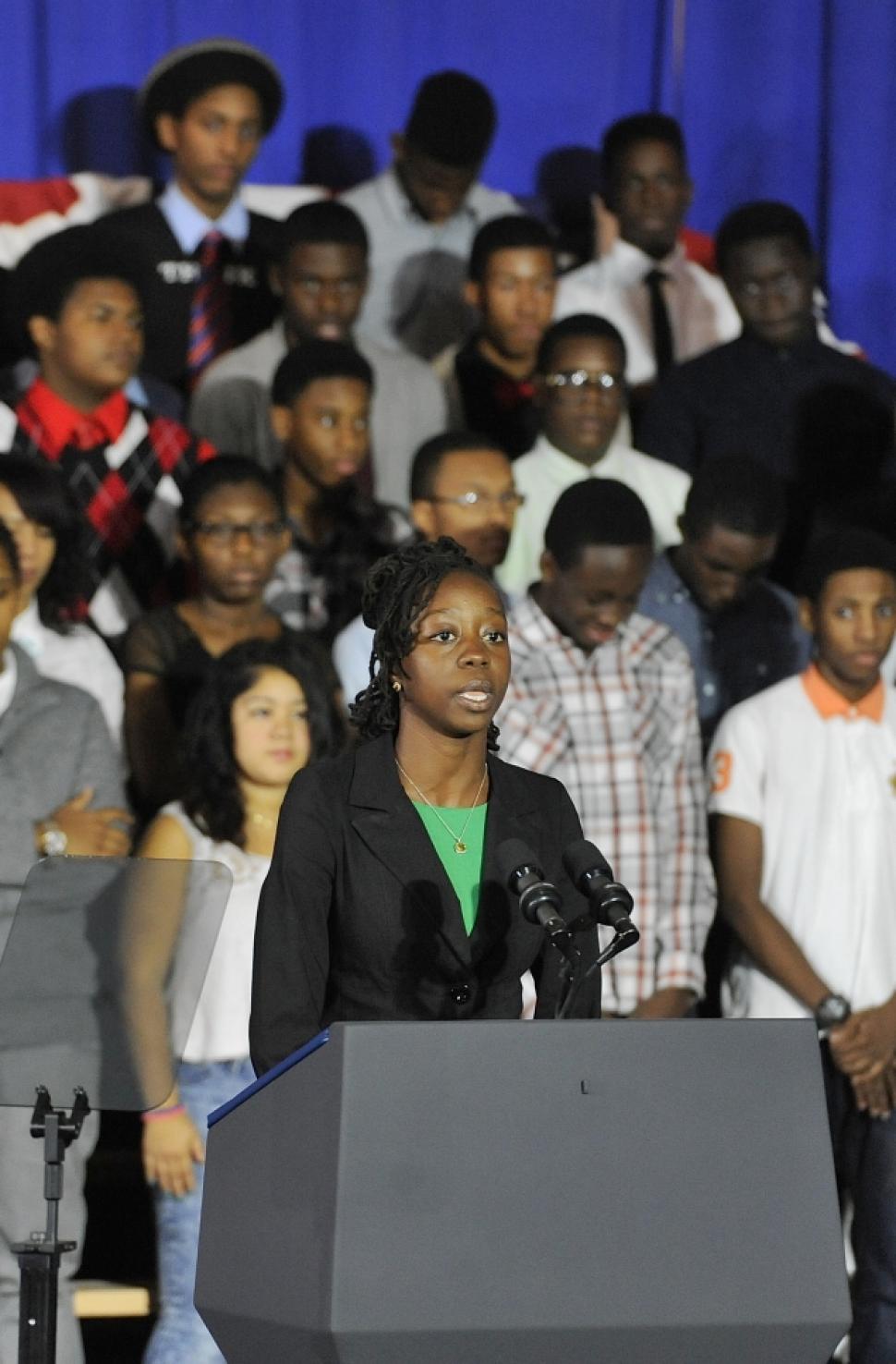 Leslieanne John is a third-year student at P-TECH (Pathways in Technology Early College High School) who garnered the attention of President Barack Obama during his visit to the school last year.  She is an accomplished young lady who hopes to become a lawyer in the future.  For her summer break this year, she is interning with the IBM Center for Applied Insights (IBM CAI), where she hopes to gain more knowledge in the technology field.  She will be conducting a series of executive interview blog posts for IBM CAI exploring topics such as technical skills necessary for business today, addressing technical skills gaps and preparing students for the future, and how technology integrates with education.

Tell us a bit more about yourself – who you are, what you do in your spare time?

Who am I? That is an interesting question because who are we really? That’s all relative to who we talk to, isn’t it? The person that you are is defined typically by the people around you; and you begin to feel what they say if you hear it enough.  In my spare time, I sing, write, and, of course, run track.

Tell us about your journey as a P-TECH student – what led you to apply, how did you join, and how has the experience been for you?

I applied to P-TECH through a misfortunate series of events that ended pretty well. I was rejected by 24 high schools (first round and second round of the high school application process) and the only options that I had were the new schools that were opening. So my mother and I took a trip to Martin Luther King Jr. Campus (over by LaGuardia high school), where the New High School fair is held, and we went to the P-TECH table. My future principal, Mr. Davis, and one of my history teachers, Mr. Ehrenfeld, were manning the table. Although the school didn’t exist yet, and even though it was a technology school (I had no interest in technology since I wanted to be an entertainment lawyer), Mr. Davis’s passion for what he was speaking about sold me.  Oh yeah, and the free degree wasn’t too bad either.

What do you like most about being a P-TECH student?

Being treated like an adult (making my own decisions, being able to manage my time the way that I want too)

What do you find most challenging about being a P-TECH student?

When President Obama visited your school, what was it like talking with him in person and having him compliment you on your achievements?

Conversing with him was actually pretty natural.  He made me and the rest of my classmates feel so comfortable. He felt like an old friend, with a bunch of men in black suits and sunglasses around him.  In his remarks, President Obama first mentioned my friend and classmate Radcliffe who had introduced the President.  I was so excited for my friend – my classmates and I were jumping everywhere with excitement for him.  Then, when he said “Leslieanne John”,  I thought I didn’t hear it correctly, so I kept with my excitement for Radcliffe. When the President continued and quoted me, my friend who was sitting next to me saw my face in shock and just started laughing. I couldn’t believe it.  After the speech was over, I went downstairs to speak with one of my coaches, and the news cameras just rushed at me.  I’m not going to lie – I was a little scared, especially when they all started yelling questions at me.

What characteristics, skills, or attitudes have set you apart and helped you be successful?

I have learned to become a loner. When I was younger, I had so many friends that EVERYONE was my friend.  As I became more successful, my circle of friends dwindled to about 6-7 people who were attempting to attain similar goals. I’ve also learned that you have to keep creating small goals for yourself that relate to your original goal, but that can be reached in a short period of time. And stay true to yourself and your beliefs.

Who has influenced you the most and why?

My parents. They are the most hardworking, loving people that I know. When I feel like I want to give up on these seemingly unreachable dreams of mine, they constantly remind me that I am already half of the way there and that, if I just push a little more, I’ll get where I need to go that much faster.

How and where do you find inspiration?

My biggest inspiration is my best friend Nathalia. She is the strongest person that I know. She has sickle cell anemia.  There are certain times that I know she wants to give up, but she keeps fighting. For nearly 18 years, she has been fighting, and, through the grace of God and the inner strength that she has, she is one of the most fun-loving and beautiful people that I have ever met. She helps keep me humble and strong.

What do you hope to learn and accomplish during your summer internship with IBM?

Mainly experience, as well as references, and maybe, if I’m lucky, a more permanent internship during the school year. *wink wink*

What advice would you give other students and young people to help them be successful?

Keep your eyes on the prize and don’t EVER compromise your core beliefs – no matter what they might be. Align yourself with people who want similar things as you AND that will be happy for you even if they haven’t gotten where they wanted to go yet. Oh, and create small goals for yourself that will eventually lead to your ultimate goal.

IBM’s Pathways in Technology Early College High Schools (P-TECH) are innovative public schools spanning grades 9 to 14 that bring together the best elements of high school, college, and career. Within a six-year, structured, and integrated timeframe, students graduate with a no-cost associates degree in applied science, engineering, computers and related disciplines, along with the skills and knowledge they need to continue their studies or step seamlessly into well paying, high potential jobs in the information technology arena for multiple industries. This model was designed to be both widely replicable and sustainable as part of a national effort to reform career and technical education.

About the IBM Center for Applied Insights

The IBM Center for Applied Insights introduces new ways of thinking, working and leading. Through evidence-based research, the Center arms leaders with pragmatic guidance and the case for change.